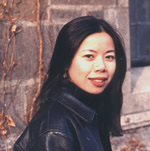 Born in New York City, she earned her B.A. from New York University and her M.F.A. from Columbia University. She coedited the anthology Watermark: Vietnamese American Poetry and Prose (Asian American Writers' Workshop, 1998) and guest edited Viet Nam: Beyond the Frame, a special issue of Michigan Quarterly Review (Fall 2004).

Her poems have appeared in Ploughshares, Women's Review of Books, and The New Yorker. She is currently at work on a second poetry collection and a novel.

She is featured in film-maker Yunah Hong's documentary Between the Lines: Asian American Women's Poetry Like the poet Vicki Hearne, she trains dogs.