From Wikivietlit
Jump to: navigation, search
Joel Martin Halpern (1929) is an anthropologist retired from the University of Massachusetts, Amherst. Work in Laos and visits to Viet Nam in the 1950s led eventually to collaboration with Lucy Nguyen-Hong-Nhiem on The Far East Comes Near: Autobiographical Accounts of Southeast Asian Students in America. 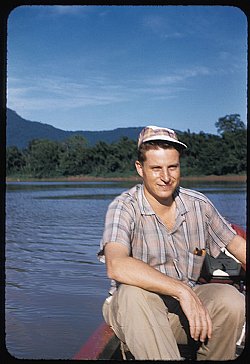 Joel Martin Halpern on Laos and the Mekong

Halpern's work as researcher, author, editor, committee-man and bibliographer weave throughout the English-language scholarly literature on Laos, from the Laos Project Papers (University of California, Los Angeles) through many revisions of the United States government handbook, Laos, a Country Study.

To focus on the man, see his impressions of Cold War work in the 1970 essay Reflections on the War in Laos, Anthropological and Otherwise.

In recent years, on-line finding guides to his collections at research libraries have extended access to Halpern's contributions and also provide entree to his life and published work.