From Wikivietlit
(Redirected from Nôm)
Jump to: navigation, search

Chữ Nôm (or simply nôm) is a vernacular script of the Vietnamese language, similar to those originating in nearby southern China, and developed by Vietnamese intellectuals as a native Vietnamese alternative to the Chinese script used by the court at Beijing. 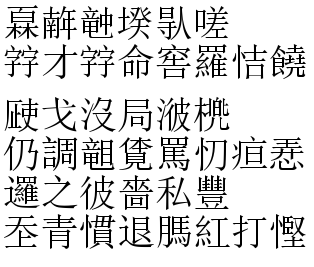 After the Vietnamese gained independence from China in 939 AD, the Vietnamese literati, wanting to create a native written language that would represent Vietnamese speech, gradually devised chữ nôm (literally translated as the “southern script,” to distinguish it from the script of the Chinese northerners). Its first published appearance is put at the early 15th-century, in several short four- and eight-line poems attributed to Nguyễn Trãi (1380-1442). Nôm is a writing system based upon Chinese ideographs but was, as John Balaban points out, “twice as difficult to master as Chinese, since nôm often takes Chinese characters and assigns them Vietnamese phonemic value while keeping other Chinese characters for their semantic value, thus doubling the total number of characters for any given expression” (13). Thus, despite the fact that it was created as a native, vernacular language, nôm was used primarily by the literati while the majority of the Vietnamese masses remained illiterate in both Chinese and nôm. Yet, as David Marr argues, most Vietnamese literati continued “to regard Chinese as the ultimate in civilized communication and thus considered nom a form of recreation” (142). Despite its reputation as a lower form of language, from the tenth century into the twentieth century, nôm was used in literary and philosophical texts, political essays, religious and medical treatises, and even royal administrative documents. During the fourteen years [1788-1802] of the Tây-Sơn emperors, nôm replaced Chinese as the official language of the government.

Nôm’s most important role, however, was as a vehicle for folk and other previously oral literature. Despite the disadvantage of being regarded as vulgar, "nom somehow managed to serve as a written vehicle for the spoken language, thus providing yet another link between the peasantry and the elite. Scholars transcribed the songs, narratives, and witticisms of villagers and also wrote down and disseminated their own ideas in nom. Since in nearly every village there was someone able to read nom aloud or convey the substance in oral synopsis, the literati acquired a greater potential for influencing the attitudes and activities of the masses" (Marr 142).

Nôm was therefore used by the literati as a way to appropriate, “explore and exploit the resources of their native culture” (Huỳnh, xix). One of the significant traits of this native culture was the oral tradition of folk poetry, or folk-singing. Vietnamese folk poems almost always took the form of lục-bát or “six-eight” verse: a couplet with six syllables in the first line and eight in the second line. This was in contrast to classical Chinese poetry, most of which has an odd number of syllables (five or seven) in each line (Huỳnh, xix).

The height of nôm's literary usage was in the eighteenth and nineteenth centuries, when many Vietnamese writers used it to compose their works. The most famous of these was Nguyễn Du's masterpiece Truyện Kiều, or The Tale of Kiều, a 3,254-verse narrative poem written in lục-bát. Another notable writer using nôm was Hồ Xuân Hương, now considered by many as one of Vietnam's greatest poets and "The Queen of Nôm."

As the usage of Quốc Ngữ, the romanized Vietnamese script created by Portuguese and French missionaries in the sixteenth and seventeenth centuries, became more widespread, nôm gradually became obsolete. Today, fewer than 100 scholars can read the language. However, efforts are being made by independent scholars and translators, as well as by the Nôm Preservation Foundation, to keep the language alive.