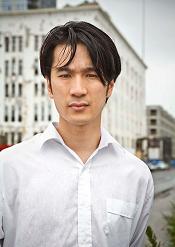 Born in Vietnam, he emigrated by boat to Melbourne, Australia before the age of one. He began professional life as a lawyer before committing himself to literature in 2004.

Nam Le has won fellowships from the Fine Arts Work Center in Provincetown, Phillips Exeter Academy, the University of East Anglia and the Iowa Writers' Workshop, where he earned his MFA. He wrote his thesis, on W.H. Auden, in 500 rhymed couplets in iambic pentameter.

His short stories have appeared in A Public Space, Zoetrope, Conjunctions, One Story, NPR’s Selected Shorts, Best New American Voices, and Best Australian Stories. His work of fiction, The Boat (Knopf 2008) won the Dylan Thomas Prize in 2008. He also won the National Book Foundation’s “5 under 35” Fiction Selections (2008), the Pushcart Prize (2007) and the Michener-Copernicus Society of America Award (2007).

He is currently working on a new book about pirates in Thailand today. Le lives in Australia as well as in New York, where he is the fiction editor of the Harvard Review.