From Wikivietlit
Jump to: navigation, search
Nguyễn Xuân Hoàng (1940) is a fiction writer, editor and poet. 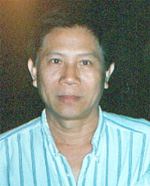 Born in Nha Trang, he graduated from the University of Dalat, taught Philosophy at the Lycée Petrus Ký in Saigon, where he edited the literary magazine Văn. He came to the United States in 1985, settled in San Jose, where he became managing editor of the Người Việt Daily News, the best known Vietnamese newspaper in America. From 1989-1994, he was co-founder and managing editor of The Ky 21, a monthly literary journal with an emphasis on politic. He also served as managing editor for Viet Mercury from 1998 to 2005, and is currently editor-in-chief of Văn, a prestigious magazine of literature and the arts founded in 1963, and of the Viet Tribune newspaper. He has also taught Vietnamese Literature, as visiting lectucter, at the University of California at Bekerley.