From Wikivietlit
Jump to: navigation, search
Phùng Quán (1932–1995) was a poet, fiction writer. 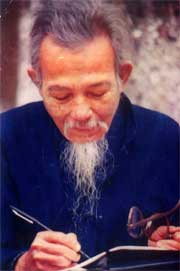 He was born in Huế and died in Hanoi. He joined the resistance against the French at age 13, then the Viet Minh, then the army of the newly-formed Democratic Republic of Vietnam. He is best remembered as a member of the Nhân Văn Giai Phẩm dissident literary movement. His biting, fearless poems, such as "Chống tham ô lãng phí" and "Lời mẹ dặn," were dubbed "atomic bombs" by the public. He was banned from publishing from 1958 until 1987, and jailed or sent to hard labor for much of this time. When not in prison, he survived by fishing clandestinely, since one needed a license, and writing about 50 books, published under different pseudonyms.