From Wikivietlit
Jump to: navigation, search
Hữu Loan (1916) is a poet. 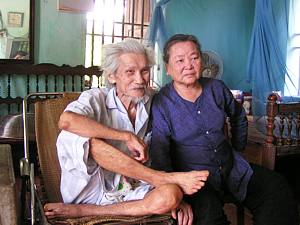 Born in Nga Lĩnh village, Thanh Hoá province, where he still lives, he was involved with Nhân Văn Giai Phẩm and became famous for "Màu Tím Hoa Sim" ["The Purple Color of Sim Flowers"], a poem about the ravages of war. Popular in both North and South during the Vietnam War, it was also put to music and recorded by several pop singers. Translated into English, it is included in Black Dog, Black Night.

In 2004, Vitek VTB, a Vietnamese electronics company, bought the copyright to this poem for $6,500, as a tribute to the poet, according to its president.