From Wikivietlit
Jump to: navigation, search
Kim-An Lieberman (1974) is a poet, essayist, and teacher. 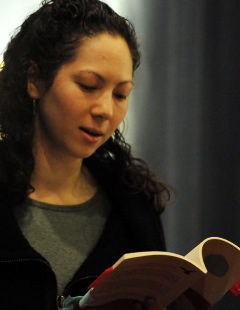 Born in Rhode Island and raised in the Pacific Northwest, she did interdisciplinary work in the humanities at the University of Washington before earning a doctorate in English at the University of California, Berkeley, specializing in Vietnamese American literature. For many years, she has taught writing and literature in middle school, high school, and college classrooms.

Her first collection of poetry, Breaking the Map, was published by Blue Begonia Press in 2008. Her essays and poems also appear in journals and anthologies including Cha: An Asian Literary Journal, CALYX, Poetry Northwest, Prairie Schooner, Threepenny Review, ZYZZYVA, AsianAmerica.Net: Ethnicity, Nationalism, and Cyberspace, and New Poets of the American West.

She has been a featured reader at venues including the Skagit River Poetry Festival, the Asian American Writers' Workshop, and the San Francisco International Poetry Festival.