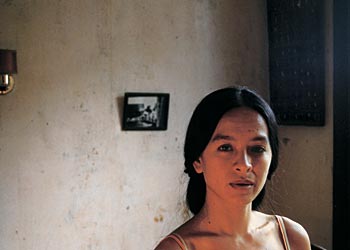 Born in Phan Thiết, Republic of Viet Nam, she escaped Viet Nam by boat with her father in 1978 and eventually resettled in Linda Vista, San Diego, where she grew up. In 1990, lê came to Massachusetts and enrolled in Hampshire College, where she concentrated on cultural studies and postcolonial literature. In 1993, lê went to Paris to research a project on French colonial picture postcards made in the early 1900s.

Back at Hampshire, she wrote poems, prose pieces, and sections of dialogue and gradually worked them into her first performance piece, Red Fiery Summer. After she graduated from Hampshire in 1994, she began peforming her solo shows, Red Fiery Summer and the bodies between us, at many different venues, including the Whitney Museum of America at Philip Morris, the International Playwright's Festival in Galway, Ireland, and the Third New Immigrant's Play Festival at the Vineyward Theater in New York City.