From Wikivietlit
Jump to: navigation, search
Nguyễn Ngọc Ngạn (1946) is a novelist and author of short stories and one memoir. 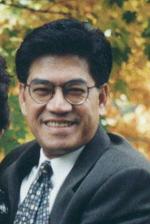 He was born in Sơn Tây, northern Vietnam, went to Saigon in 1954, taught school after graduating from the University of Saigon, before being drafted into the South Vietnamese Army. After the Fall of Saigon in 1975, he was imprisoned by the Communists for three years, then sent with his family to perform hard labor in a "New Economic Zone." In 1979, he and his family escaped Vietnam by boat, but he alone reached Malaysia, his wife and four-year-old son having died when their boat capsized within sight of shore, drowning 161 people altogether. He was given asylum in Canada that same year, eventually settling in Toronto. While still in a Malaysian refugee camp, he wrote his first novel, Những Người Đàn Bà Còn Ở Lại [The Women Left Behind], but it wasn't published until eight years later. His first published work, "The Will of Heaven" (Hutton 1980), was a memoir co-written in English with E.E. Richey. He has since published 25 novels and collections of short stories in Vietnamese, and is by far the most popular author in the overseas Vietnamese community. He is also famous as a host of a series of music-variety videos, "Paris by Night," most often filmed in... Las Vegas.