From Wikivietlit
Jump to: navigation, search
Tran Dieu Hang (1952) is a short story writer, from the first generation to begin careers in the United States. 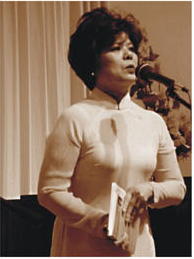 Tran Dieu Hang believes that she was the first Vietnamese woman to publish fiction in America after the fall of the Saigon. The story, "Trai Thang 4" [April in Camp Pendleton] appeared in Que Huong magazine in 1979. This was her first appearance anywhere as an author, although she had served as editor in chief of the annual at Trung Vuong, Saigon’s elite high school for young women.

Since then, the stories of Tran Dieu Hang have appeared in the most prestigious Vietnamese-language literary journals of North America: Van, Van Hoc, Lang Van, The Ky 21, and Hop Luu. She has published four books of stories: Vu Dieu cua Loai Cong (The Peacock Dance) in 1984, Mua Dat La (Rain on the Strange Land) in 1986, Chom Chom Yeu Dau (Chom Chom Darling) in 1989, and Niem Im Lang cua May (The Silence of Clouds) in 2002.