From Wikivietlit
Jump to: navigation, search
Lily Hoang (1981) is a novelist. She was born in San Antonio, Texas to parents who had fled the Republic of Viet Nam in 1975. 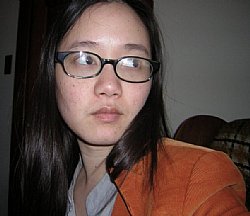 Lily Hoang, 2009, courtesy of the author

She earned an MFA from the University of Notre Dame in 2006 and teaches at St. Mary's College in Indiana. Her work has appeared in Black Warrior Review, Quarter After Eight, Fairy Tale Review, Action Yes, 5_Trope, and Harp & Altar. She is an associate editor of Starcherone Books.

Her manuscript for Parabola took first prize in the Chiasmus Press Un-Doing the Novel/First Book Contest in 2006 and Changing won the PEN/Beyond Margins book award in 2009. Parabola uses the well-known function, and Changing uses the hexagrams of I Ching, to show a family gone mad in the United States, recalling Nhat Linh's Doan tuyet (Rupture) from colonial Ha Noi.

Dan Duffy started this entry with review by Lily Hoang.