Linda Lê (1963) is a novelist born in Viet Nam, to a Vietnamese family, educated in French language there and in France.

She was born in Dalat, emigrated to France in 1977, and now lives in Paris. Her father was a Vietnamese engineer originally from the North of the country, and her mother came from a well-to-do Vietnamese family with naturalized French citizenship. For the first few years of her life, Lê lived with her family in Dalat. In 1968, however, her family was forced to relocate due to North Vietnamese troop movement into the South. She describes this traumatic experience in a short text, "Les pieds nus": "Ils se sont précipités hors de la maison et ils courent sur la route. Des gens courent derrière, devant eux. D’autres sont allongés sur le bord du chemin, immobiles, leur chemise est tachée de rouge. [They hurry out of the house and run along the road. People run behind them, in front of them. Others are stretched out by the side of the road, motionless, their shirts spotted with red.]"

In 1969, the family moved to Saigon, where Lê attended a French lycée. There, she was introduced to French literature by writers such as Victor Hugo and Honoré Balzac, whose works inspired her to become a writer herself. In 1977, after the fall of Saigon to North Vietnamese troops, she left for Le Havre with her mother, three sisters, and grandmother. Her non-Francophone father was left behind in Saigon; the figure of the dead or abandoned father would haunt Lê's works for years to come. In Le Havre, Lê attended a lycée where a literature teacher introduced her to the works of Marcel Proust. In 1981 she transferred to the Henri IV lycée in Paris, and later went on to study at the Sorbonne.

She published her first novel, Un si tendre vampire, in 1987 when she was only 23 years old. 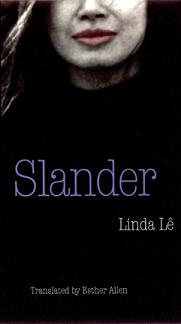 This was quickly followed by Fuir in 1988 and Solo, a collection of short stories, in 1989. During this time, she worked as a preface editor at Hachette; a collection of the prefaces she wrote was published in 1999 under the title Tu écriras sur le bonheur. She published one more novel, Les Évangiles du crime, in 1992 before moving to Christian Borgois Éditeur, with whom she has been ever since.

In 1995, Lê's father, whom Lê had not seen for almost twenty years, but with whom she had been corresponding regularly, died in Vietnam. He had been preparing to visit her in France for the first time. His death prompted Lê to return to Vietnam for the first time since leaving in 1977. Her father's death also lead Lê to experience "hallucinations, suicidal thoughts, and paranoiac behavior," which ultimately resulted in Lê's hospitalization.

Her traumatic reaction to her father's death influenced her writing in Les Trois parques (1997), the first novel in what may be regarded as a tryptich revolving around Lê's father's death. In her postface to Les Trois parques, a novel about three cousins who are preparing for the visit of their father/uncle to France, Lê wrote that "ce livre avait trouvé, dans les semaines suivant son achèvement, un épilogue quelque peu dramatique – trois mois de stupeur et de confusion – que je n’aurais pu affronter sans l’aide de quelques amies et d’un médecin [this book had found, in the weeks before its completion, a somewhat dramatic epilogue - three months of stupor and confusion - that I would not have been able to brave without the help of several friends and a doctor.]" Les Trois parques was followed by Voix (1998), a short novel in which the multiple narrators are patients in a mental asylum, and Lettre morte (1999), which continues the theme of the lost father figure and "ideal reader."