From Wikivietlit
(Redirected from Lucy Nguyen)
Jump to: navigation, search
Lucy Nguyen-Hong-Nhiem (1939) is an educator now retired from the University of Massachusetts. 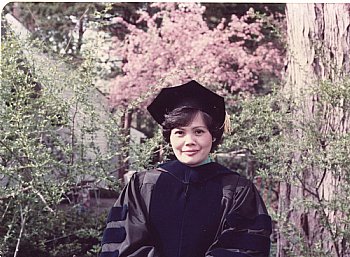 Lucy Nguyen-Hong-Nhiem at commencement, the University of Massachusetts, 1982

Her dissertation uses both linguistic and literary evidence to elucidate geopolitical themes in the fiction of the French-language author Phạm Văn Ký.

Her collection with anthropologist Joel Martin Halpern, The Far East Comes Near: Autobiographical Accounts of Southeast Asian Students in America captures the first generation of young people making their way in the United States after escaping the fall of Phnom Penh, Saigon and Vientiane.

The collection grew from a course on Southeast Asia she taught with Halpern through the 1980s. She was also teaching one of the first Vietnamese literature courses in the United States, for students of Vietnamese language, and staging not only Vietnamese but as well Lao and Khmer cultural events for the Five Colleges communities. In 1990 she founded the United Asia Learning Resource Center.

Her memoir, A Dragon Child: Reflections of a Daughter of Annam in America, presents the strong-minded, well-educated woman who achieved distinction serving her people through education, first in French and Vietnamese in Viet Nam, then in English in the United States. It offers pointed details on topics of widespread interest from the reception of modern literature in family life in Viet Nam, to the coming of communism to small landholdings, to the deliberate integration of refugees into Massachusetts.