From Wikivietlit
Jump to: navigation, search
Doãn Quốc Sỹ (1923) is a fiction writer and critic. 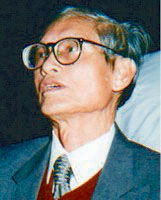 Born in Hà Đông, northern Vietnam, he went to Saigon in 1954, where he founded the publishing house Sáng Tạo [Creativity] and, with Mai Thảo, Thanh Tâm Tuyền, Tô Thùy Yên and others, also the influentual literary journal of the same name. After 1975, he was imprisoned by the Communist government several times, for a total of 14 years, before being allowed to emigrate to the United States. He has lived in Houston, Texas, since 1995. The author of about 25 books, his fable, "Con cá mắc cạn," is translated into English as "The Stranded Fish" and included in Vietnam: A traveler's literary companion, edited by Nguyễn Quí Ðức and John Balaban.