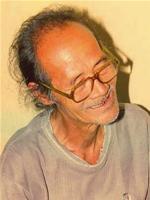 He was born in Hue. Soon after, his father was killed by the French during the First Indochina War. During the Vietnam War, he contributed to the underground newspaper Thanh Niên Chống Mỹ [Youth against America]. He joined the National Liberation Front in 1965, lived in areas under its control, broadcasting propaganda until 1969, when he was injured and removed to the north.

In spite of his allegiance to the Communist cause during the war--his pen name, "Vàng Sao," means "Yellow Star," a reference to the national flag--he has been blacklisted since 1972 for his candid depictions of social conditions inside Vietnam. He’s been harassed constantly, even imprisoned, his manuscripts confiscated.

His poetic voice is bemused, ironic, deliberately banal, a reaction against the dogmatic bombast of many of his contemporaries. His poems have been translated into English and published in the journals American Poetry Review (Vol.28/No.1, Jan/Feb 1999) and The Literary Review (Winter 1999).