From Wikivietlit
Jump to: navigation, search
Viet Nam War Generation Journal (2001-2003) published research, criticism, fiction and poetry on the Viet Nam war. Its contents are distinguished by the populist and progressive interests of founders Bruce Solheim and David A. Willson. The journal appeared for the two volume years dated from April 2001 through April 2003, with a total of seven issues including one final double issue. Named "One of the the Ten Best New Magazines of 2001" by Library Journal, it withdrew after a drop in subscriptions. 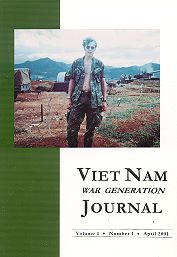 Lan Cao discussed by Janis Haswell in one of eight articles on Robert Olen Butler. Volume 2, numbers 3 and 4 (April, 2003)