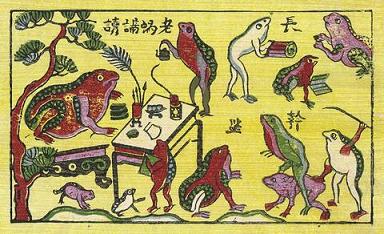 A woodcut from Đông Hồ village, near Hanoi

The term ca dao (derived from a line in the Wei Wind section of the classic Chinese folk poetry anthology, Shi Jing, or Books of Odes) can be loosely translated as “unaccompanied songs.” Ca: to sing; dao: to sing without music. The ca dao poems, transmitted orally, sustained and nourished the Vietnamese language through its centuries of domination and influence by China. Up until the beginning of the 19th century, the literate class--a distinct minority, preferred to compose their poems, with few exceptions, in Classical Chinese, which was inaccessible to the masses. A native script, Chữ Nôm, was first developed in the 13th century but never reached full flowering until the beginning of the 19th century, when Nguyễn Du composed his masterpiece, the incomparable 3,254-line poem, "Kim Vân Kiều.” The story of a prostitute, it pilfered its plot line from a 17th century Chinese novel of the same name.

Outside of the official purview, the ca dao poems flourished, telling of the everyday life and concerns of ordinary Vietnamese. The poems tend to be short--with many comprised of a single couplet of fourteen syllables (three less than a standard haiku)--but there are also many longer ones with 20 lines or more. Ca dao can be of four-syllable lines, with end rhymes: 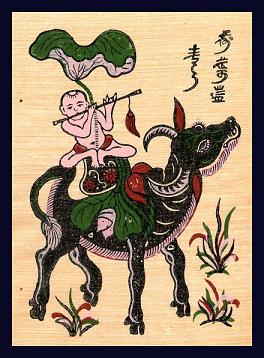 Buffalo, let me tell you something,
Go out and plow with me,
Out in the field, be a farmer.
Me here, you there, who's griping?
As long as the rice stalks are blooming,
There'll be blades of grass for you to eat.
(tr. Đinh)

The rhyme scheme indicated above is ideal and most ca dao in luc bat form do not adhere strictly to it. A ca dao line can also be of two, five or seven syllables. Variations are common among poems, as they are passed on from one generation to the next, or from one province to another. Spanning all genres: flirting poems, work songs, lullabies, lampoons, etc., some ca dao deal with trivia, such as the rituals of farming life, when to plant certain crops and so forth:

The first month is for carousing,
The second is for planting eggplants, beans and sweet potatoes.
The beans are ripe by the third month.
We take them home, lay them out to dry.
During the fourth month, buy buffaloes and cows,
Get ready to sow during the fifth month.
[...]
(tr. Đinh)

The most common theme, however, is the vagaries of relations between the sexes: lost love, husbands complaining about wives, wives kvetching about husbands, conjugal fidelity and infidelity, marital bliss, polygamy, concubinage, arranged marriages, etc. Unlike much of the country's learned poetry, ca dao are surprisingly candid about human sexuality. Within their lines, the prudish strictures of Neo-Confucianism are routinely ignored. Like other forms of popular expressions, ca dao are often playful and irreverent. Check out this one about a monk and a nun:

Also notable is their rich inventory of plants and animals, which reflects a deep awareness of the natural environment. In some poems, the speaker talks to the moon, a heron, or an ant ... Analogies are often drawn between human, animal, and plant life:

The wind escorts the moon; the moon escorts the wind.
When the moon sets, who can the wind be with?
(tr. Đinh) 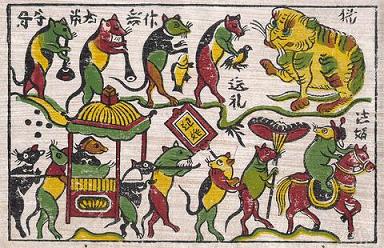 In the following, each animal matches itself with its appropriate garnish:

The chicken clucked, pecked on a lime leaf.
The pig goes, oink, oink, buy me an onion.
The dog sobbed standing up, sobbed sitting down,
Said, Mother, please, buy me a dime's worth of galingale.
(tr. Đinh)

Poems were composed for special occasions. On the day before new years, it was formerly the custom in rural villages for bands of children to go trick or treating for money. They would shake their bamboo coin containers and chant:

Sook sack sook sere!
What house still lit by lamp or fire,
Open the door and let us in,
On the top bunk, two dragons are coupling,
On the bottom bunk, two dragons are waiting,
Go to the back, there's a house with tiled roof.
You have an elephant, sir, and a horse all harnessed
You'll live to be a hundred, plus five
[...]
(tr. Đinh)

It should be pointed out that ca dao are not folk songs (dân ca), although most folk songs are made from ca dao. In a folk song, extra syllables, often nonsensical, are added to the poem to urge the melody along. Refrains are used in a folk song, never in a ca dao. Most importantly, a folk song is anchored in a musical measure, beat-driven, whereas a ca dao is guided by metrics, stress-driven. The Vietnamese verb for reciting a poem, any poem, is “ngâm,” which roughly means “reciting in a sing song voice”; the verb for singing is “ca” or “hát.” You “hát” a folk song, “ngâm” a ca dao. An example of a ca dao being ngam can be found in Trần Anh Hùng's 1996 film “Cyclo,” where the “boss lady” ngâm "Thằng Bờm" ["Little Bờm"] to her retarded son.

Although they were primarily the domain of the peasants, a certain degree of osmosis existed between it and high literature. Scholars who failed to pass the mandarinate exams and be summoned to the capital would remain in their home villages to teach private classes, practice medicine, read fortunes, or act as scribes. As a participant in village life, some of their Nom improvisations would, over time, be circulated as ca dao. Fragments of well-known compositions also entered the oral tradition and, conversely, learned poets would occasionally borrow a line or a couplet from folk poetry for their own poems. There are instances where no clear authorship can be ascertained. This poem by poet Nguyễn Công Trứ (1778-1858), has also been catalogued by some anthologists as a ca dao:

In despair, I blame you, Sky!
Sad, I laugh; happy, I cry.
In my next life, please don't
Let me come back as a man.
I'd rather be a pine on a ridge,
Silhouetted against the sky.
If you don't mind the cold,
Then hang with the pines.
(tr. Đinh)

More recently, the sober, respected poet, Bàng Bá Lân (born 1912), claimed that the following couplet, assumed by many to be a ca dao, had actually been penned by him:

Hey, Miss, bailing water by the side of the road,
Why are you throwing the moon's golden light away?
(tr. Đinh)

The most fascinating byproduct of the intercourse between ca dao and high literature is the Hồ Xuân Hương phenomenon. She was a late 18th-early 19th century poet whose coy, often bawdy lyrics give her a unique position in Vietnamese literature. An example: 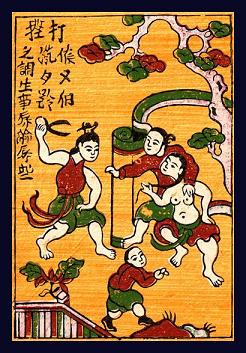 Which squabble among twelve midwives
Caused them to throw your love-thing away?
To hell with that squeaking mouse.
To hell with that droning wasp.
Who knows if it's smooth or bumpy?
Who can tell if it's stem or bud?
Whatever it is, it must do.
You’ll never be called a slut.
(tr. Linh Đinh)

Since her poems were not collected and published until nearly a hundred years after her death, her entire oeuvre, 139 poems by one count, had survived through oral transmission. But the discovery of a batch of poems in 1963 which can actually be traced to the historical Hồ Xuân Hương strongly suggested that all of these other “Hồ Xuân Hương” poems are apocryphal, concocted by the masses or bastardized through circulation. It shouldn't matter: The faux Hồ Xuân Hương poems still constitute a remarkable body of works and are a tribute to both the real poet and the rigor of the oral tradition.

No one knows how many ca dao exist. The most exhaustive anthology, compiled by Nguyễn Văn Ngọc in 1928, contained nearly a thousand poems (as well as 6,000 figures of speech and proverbs). This figure is supplemented by many other anthologies but there are, undoubtedly, many more poems to be collected. A more intriguing question is how old are the oldest poems? The first anthology of this material was not compiled until 1787, by Trần Danh Ánh and Ngô Đình Thái, who translated the poems into Chinese. Although it is impossible to positively date any poem earlier than the late 18th century, one can assume that many of them are a great deal older than that.

Some scholars try to date a ca dao by its content. The critic Vũ Ngọc Phan cited the following as possibly being a very old poem:

Seeing you, I want to follow you,
But I'm afraid
You're so poor, you'll sell me!
Marry you and eat what?
Manioc shoot is tart, fig shoot dry.
Marry you and be homeless,
Parentless. Whom will I count on?
(tr. Đinh)

Such a desperate existence, the selling of one's wife; eating manioc and fig shoots—“living almost like deer”--led the Marxist critic Vũ Ngọc Phan to speculate that this poem must be very old. But then he wrote: “We cannot know what period this is, when workers had to live under such abysmal conditions, because it may have been a normal situation under feudalism.”[4] Absent concrete data, no one knows how “normal” this situation "may have been" under feudalism, but to read a poem so literally is to leave no room for exaggerations and humor. Flirting poems, of which this is one, tend to be very playful.

When an actual person or historical situation is mentioned, what is revealed is only how new that poem is, since references could always be made to an earlier epoch or century. Take the following couplet, popularly believed to allude to Đỗ Thích, a 10th century mandarin who assassinated emperor Đinh Tiên Hoàng after dreaming that a star had fallen into his mouth, an omen he took to mean that he will become the next emperor:

A frog lying at the edge of a pond,
Hankering for a star.
(tr. Đinh)

All we know is that it was written between 979, the year of the assassination, and 1914, the earliest mention of the poem in print. The individual words themselves are contemporary-sounding and yield no clues, meaning that, even if its content is ancient, this poem has been updated through the centuries. A live folk tradition is always in flux. By contrast, poems written by the literati--for example, those in the late 15th century Nôm anthology Hồng Đức Quốc Âm Thi Tập--are fixed in time and laced with archaic words.

One ca dao, probably composed around the turn of the century, begins:

Another from around that time, reflecting the darker side of Vietnam's encounter with the West, goes like this:

Whoever crosses the steel bridge in Vinh Thong
Hears the children sing in the evening,
Hears the crow say to the kite,
Many French corpses are under this bridge.
(tr. Đinh)

Proverbs are often incorporated into a ca dao, as in the following: 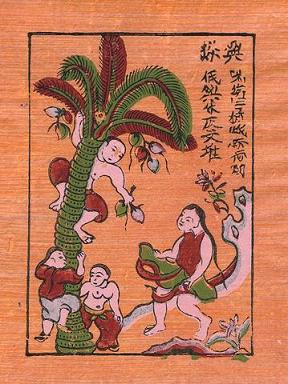 Although proverbs are didactic by nature, both proverbs and riddles share with the ca dao poems a quality of play and irreverence. Approximating poetry, they were often composed in metrics with alliterations and rhymes. As related phenomena of a single tradition, it is instructive to consider all three genres together.

A reevaluation of the merits of ca dao coincided with the formation of a new Vietnamese consciousness during the first decades of the 20th century. The French occupation of the country, completed by 1883, jolted Vietnam from its moorings to a Chinese-inspired Confucian model of society. A new national culture was needed to counter the erosions from outside. The country's heritage had to be redefined and protected, and ca dao were finally recognized as an important part of this heritage. The prominent critic, Phạm Quỳnh, wrote in a 1921 essay:

"Even though our oral literature has not been recorded in any book, I will insist that it is a very rich one, richer, perhaps, than any other country. Although it is not without its crudeness, this oral literature is also profoundly resonant; one can say that the wisdom, morals, and aesthetics of our common folks are all contained within these idioms." 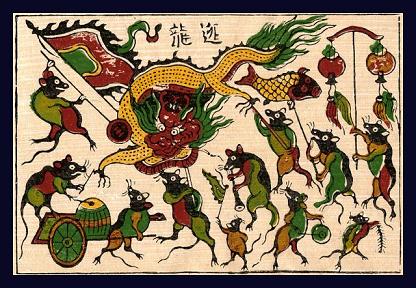